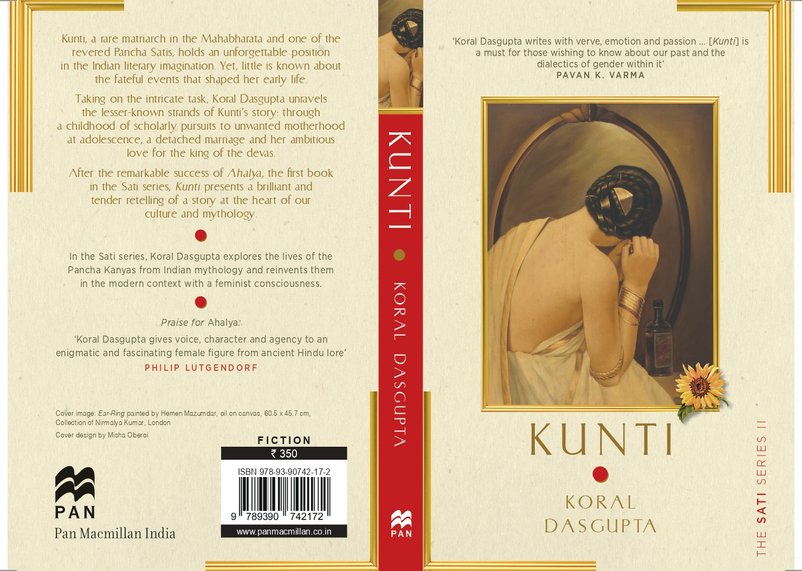 THE SATI SERIES of books are works of mythological fiction. These narratives are challenging towards the patriarchal observation of the myth, narrowing down the vast scope of feminine leadership and historical interpretation across centuries, inversely impacting the understanding of women from India and broadly, South Asia.

Various creative translations (including oral traditions) of religious storytelling have influenced the gender responses in India. Not only have they compromised the sociopolitical identity of women, but have also endorsed a regressive image of men coined as heroism. A careful reading of the religious literature provides many instances that are inclusive, liberal and modern - they are grossly suppressed for patriarchal convenience. THE SATI SERIES discovers the compassionate but independent voices of Panch Kanya (five virgins) - disrupting, questioning & reconstructing the transformational  power of these legends.

AHALYA was shortlisted for AutHER Awards (best fiction and popular choice categories) in 2020-21. KUNTI is longlisted for the Valley of Words awards, Dehradun Literature Festival, 2022.

‘Ahalya, Draupadi, Kunti, Tara, Mandodari – each of the Pancha Kanyas is fascinating. Ahalya’s storyhas been told and retold several times, sometimes with varying accounts across texts. What was herrelationship with Gautam and Indra? What was her crime? How was she redeemed? Why is she amongthe Pancha Kanya? There have been modern retellings and interpretations too. Koral Dasgupta’s wonderfulretelling adds to this corpus, with a lyrical and poetic quality. The image that will remain with you is of theMist. That is the reason Ahalya, and this rendition, is so enthralling.’ – Bibek Debroy

‘Koral Dasgupta’s evocation of Ahalya, the first of the Panch Kanyas, the five virtuous women from Indianmyth, is an enigmatic tale about purity, chastity, seduction, and redemption, told from the perspectiveof the eternal feminine.’ – Namita Gokhale

‘Amazing premise and approach. This is one unique take on an age-old tale. Brilliant and intriguing.’– Anand Neelkantan

'Go, woman, find your world yourself. The joy you seek deserves to be discovered. Armed with this advice, Ahalya sets off on her life's journey. The magical and thought-provoking adventure that follows will intrigue and mesmerize readers.' - Chitra Banerjee Divakaruni

‘'Koral Dasgupta writes about Kunti, one of the panch kanyas, with verve, emotion and passion.  Her highly readable account of this fascinating character, who played a key role in the Mahabharata, is a must for those wishing to know about our past and the dialectics of gender within it'. – Pavan K. Varma

'Impressed. I literally never imagined the interior world of a character from mythology in this way, let alone contemplating this way of reflecting on the soul, embodiment, desire, and a woman's experience of the Brahma and Indra dominated worlds! Really powerful.' - Prof. Brian A. Hatcher

Bringing heroines of yore, like Ahalya & Kunti, to contemporary times,  Koral Dasgupta writes with a rare verve & energy. Never dull or pedantic, she makes the woman within the legend come alive. A rare talent.

'A stream of consciousness; a spiritual telling. It rescued and redeemed the purity ruse. Koral is a visual writer.' - Nabila Jamshed

'Dasgupta makes old myths contemporary and relevant with an understated elan and compactness.'

'A stunning read. Fluent and engaging. What a fine writer!'

'Panchakanya and other women, reinterpreted,  is a most pertinent call. Ahalya  is beautifully written and the little details and imagined conversations  bring the character alive. I also enjoyed the  almost surrealistic movement between mythical time and ours. It’s a reminder that we in India live by a philosophy of transitions, in-between-ness.  Ahalya is amongst us.'

'Kunti's story is not easy to write. Koral has brought her out in flesh and blood'.

Kunti, the second in her Sati series, takes the matriarch of the Mahabharat and recasts her as a woman with yearnings, desire, ambition and capability. The first book in the series, Ahalya, cast an understanding, feminist lens on the much maligned Ahalya, positioning her as a woman who had been boxed into a marriage not of her choosing. We see Ahalya and now Kunti, as women we can all identify with, sympathise with and root for. In their quest for fulfilment, we catch glimpses of ourselves. This perhaps, is the greatest achievement ofthe Sati series, it humanises the women we’ve seen through the patriarchal lens, it puts them in the spotlight and not as viewed through the gaze of the narrators who often cast them in relative perspective to the male figures of the myth. A magnificent retelling, this is a must read.' –  Kiran Manral

Koral Dasgupta makes the ancient myths speak in new and unexpected voices; voices that have been lost and sunken in the dominant narrative consciousness, and yet, the voices of characters who made the flesh, blood, and the values of the epics possible.

Mythological women, especially Indian ones tend to be viewed primarily through a patriarchal lens. Which is why I read Kunti by Koral Dasgupta with urgent excitement. At last, a great woman of myth - redefined. At last, the female gaze prioritised. A beautiful and lyrical retelling of the story of Kunti, not merely as wife of Pandu and mother of the Pandavas, but as an intelligent, political, sensuous woman capable of directing both her destiny and her desires. A woman who walks with kings, sages and gods and leaves her imprint on them, a woman of agency rather than sacrificing helplessness. I am so glad the author is on a journey to reclaim these powerful women of myth and lore and I look forward to her recreation of Draupadi, Mandodari and Tara. An impressive achievement.

It isn't easy to retell a story that's well known. To recreate a character from our itihasa with so much empathy and integrity as to make us modern women look back in wonder.Koral Dasgupta has managed to do just that. Her Kunti is heartbreakingly real.

I have always been fascinated by Kunti. I was eagerly awaiting reading Koral Dasgupta’s latest book in the Sati Series. The writing as fierce as the character Kunti herself, so bold, assertive, unafraid. I found myself underlining sentences so beautifully phrased, on several pages. The book drew me in as Kunti visualized her future, her union with Indra and the birth of her son Arjun. This book will leave you elevated.

Ahalya and Kunti are completely unflinching and unashamed in their depictions of female pleasure and intercourse. These scenes took me by surprise, but in retrospect, their inclusion aligns well with the narrative that Dasgupta works to tell. One could read these unapologetically written scenes as an insistence that surrendering to indriya and discovering one’s desires is not truly something sinful but rather something to revel in.  CHA LITERARY JOURNAL

The author has focused on the making of these characters as contributive to the unfolding and shaping of the epic mythologies. THE WOMB

An ecocritical reading of Ahalya reveals the exploration of an ancient connection with nature that’s sacred, intimate, and as we are in the midst of an environmental emergency, vital to reconcile with today.  FIRSTPOST

...the brilliance of Dasgupta’s retelling is not just within the confines of that transformation itself, but rather, the importance of being seen, validated, and loved as you are.

In a most intriguing retelling, Dasgupta’s narrative turns the seduction story on its head, making Ahalya the seducer instead of the seduced.  SCROLL

An Author's Afternoon with the Prabha Khaitan Foundation

Mythology and Modernity in Women's Literature.

Sati Series - Women from Mythology: A talk for Abhivyakti organised by AWWA

Mythology, Workplace and Feminism: a Podcast

"While Koral paints a fascinating picture of the world that the women operate in, she also leaves enough for the creativity of your own minds to take flight and make their worlds your own."

"It’s hard to see why Koral Dasgupta wouldn’t employ her literary grace yet again, to convey Kunti’s story. As she continues with the Sati series, she is gaining ground in the magnificence of her diction, in the use of artistic liberty to chisel out uncanny strands of beauty derived from the feminine foundation. Over the top, remains her able use of metaphorical splendour, how she effortlessly makes the natural elements dance to the tunes of the story, and how she rhythmizes illusion, desire and longing..."Deepan's Bookshelf

"...The most astounding thing about this book is the tone; which, if read aloud feels like a chant, a continuous humming of words and one might, while reading forget to pause for a breathe. The sentences which are short and sharp, are weaved like a rosary that refuses to end. Imagine an epic poem, how the praises are sung and the bravery and follies of our hero told and retold; that’s exactly the tone of this book. Not preachy but grand..."

"...Koral juxtaposes time, space and moralities to frame what made Kunti into the character she is in the Mahabharata. In doing so, Koral uses first person vocals, finally allowing Kunti to own her narrative as Kunti and not as someone's mother, wife or daughter. In here, Koral shows the role of feminism as well — it liberates women from the roles they are supposed to fit in, it highlights the roles that are not talked about..."

"...Koral’s writing is passionate, bold and forthright. While reading this book, words flowed in my mind as if someone is acting in a theatre and delivering their dialogues with utmost passion. Her art of presenting a straight up fact with metaphorical speech is something to admire... Kunti’s known role in Indian literary imagination has got a huge leap through this book. The author’s approach towards feminist writing is defined & concrete..."

Koral’s sensitive novel is ought to be read by every thinking Indian, affianced, married or separated. It shows, with exceptional fictional skill, the subtle and everyday way in which men and women are bludgeoned to play scripted subordinate roles.

Such stories are the need of the hour (and generations to come) which gives a better meaning to the equality amongst gender from the mythological lores which was long suppressed by the rise of Monastic orders and need to be retold or at least reinterpreted for the coming generation to learn lessons from.

Koral Dasgupta has made us see Ahalya as the symbol of rejuvenation and innocence, as the one who heralds the sanctity of persona, let alone the body with its flesh and bones.

The first-person narrative that too from a woman-author served to AHALYA's advantage. Gaurav Sharma Lakhi

Ahalya is entertaining, well-researched, and offers an interesting see-through into the ancient world. Richa Mehndiratta

There’s always another side to a story, and this one’s the side of the Woman, whose voice have never been heard before, whose tale has never been told before. Sayantoni Das

What makes this retelling of an age old tale special is its symbolism and thought-provoking words. In short, the book is mystical and intriguing.

7 works of fiction by Indian authors releasing in August 2020